In early September I was fortunate to be among 22 international artists (from as far afield as South Korea, USA, India, New Zealand, Iran, Australia, Germany, Italy and France) warmly invited to Doué en Anjou in the Saumur Region of the Loire, France, to live and work amongst the plethora of caves that sit just beneath the surface. During the 10 day residency we were taken to troglodyte habitations, sarcophagus workshops, a zoo, a farm, a quarry, a woodland lake, art galleries, champagne cellars, vineyards and restaurants as well as sites along the Loire to create site-specific nature-based works. Final installations and video works were presented to an audience of 900 sponsors, local school children, press, dignitaries and the general public at Les Perrieres cave centre as part of the national Heritage celebrations. The residency, part of a series throughout Europe organized by YATOOi during 2017, was a wonderfully rich and playful cultural exchange supported by local generosity and inspiring an outstanding depth and variety of work reflecting the diverse backgrounds and environments shared. 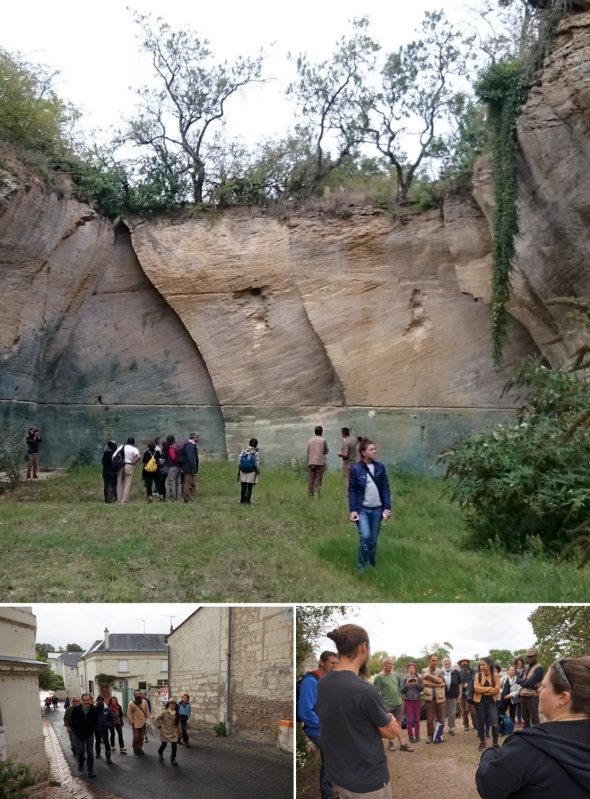 Despite the difficulties of language good friendships were established through common acts of work and play, through the joyful sharing of cultural peculiarities and through shared experience, all helped by a plentiful supply of local wine and champagne – we were in France after all! The generosity and openness of the local people, businesses and sponsors to a group of unknown artists descending into the area was quite remarkable. All events within the residency – openings, introductions, public presentations and the final exhibition – were all well and enthusiastically attended. Much credit should of course be given to the residency organizers (Olivier Huet and Magrit) who brought such bounty to the group and facilitated the residency in a wonderfully warm, relaxed and friendly manner. As you can see from the program we were kept very busy during the residency adding an enjoyable intensity to proceedings.

The work, framed within the residency as ‘Nature’ or ‘Land’ Art, was created during short ’workshops’ (visits) to places of interest or relevance to the theme of ‘Art Underground’. It was hoped that through simple introductions to the history, ecology and geology of the places we would build up a sense of the extraordinary dual (underground/surface) character of the region. Throughout the first week we all developed a better relationship to and sense of the materials prevalent and formative to the area. This knowledge allowed us to slowly form ideas for a final piece to be installed or shown within or near the cave complex at Les Perrieres where we were so comfortably accommodated. The cave complex is a fantastic attraction in itself, catering for public and school groups, having employed artists to interpret and enrich the network of caves carved from the earth for building materials over the last 500 years. The experience of spending such a lot of time underground, to emerge intermittently into the ‘light’, was at once quite disorientating and somehow reassuring, and also hard to describe. (Returning home to a small house in the English countryside, with windows overlooking a valley, certainly felt very strange.)

As an artist (maybe overly) academically acquainted with the various forms and history of environmental art it was fantastically refreshing to simply make – to spend time with others in an environment, to explore new and familiar materials in a different context and to enjoy the varied processes employed by the other artists. The care and attention both in making, recording and documenting that was adopted by many was an inspiration. An amazing skill for choosing sites for installations where they may be viewed and documented best was also apparent, as was an enviable dexterity with digital editing and animation among the group. 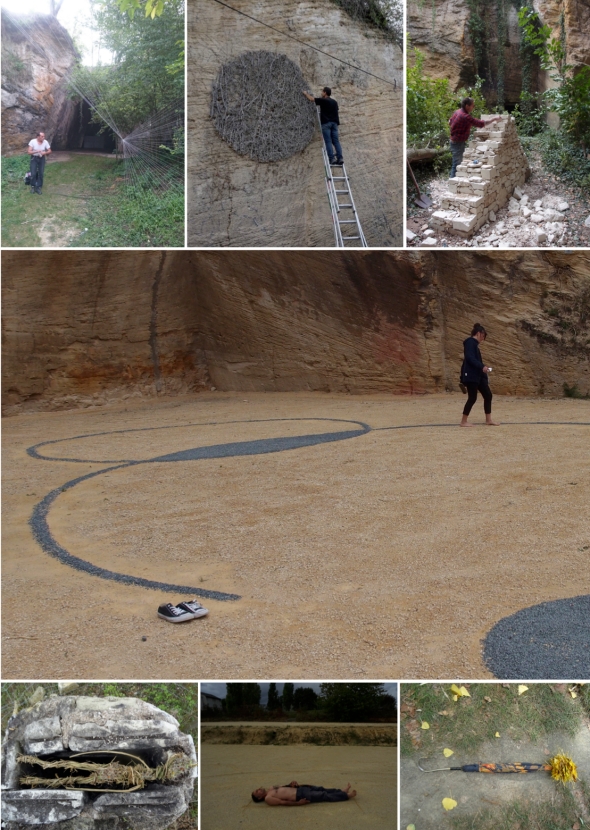 The lack of academic analysis and critique, whether by design or through language difficulties, was simply refreshing. While Land Art or Nature Art may be acknowledged within an art historical context it is often totally dismissed (for which I have been guilty) as a relevant form or practice by more ecologically/socially engaged contemporary artists. For example, Richard Long is often criticized for simply taking formal and conceptual ideas out of the gallery or bringing ‘natural’ materials back in, while Andy Goldsworthy overly-aestheticizing Nature, without acknowledgement of any political issues relevant to subject, material or space, and Robert Smithson for the use of massively macho machinery to make vast changes to a landscape without consideration for ecological consequences. I now personally appreciate all as parallel and historical aspects to all work of and about the environment – Art does not always have to be so overtly political after all, working intrinsically and subliminally within culture as a whole. 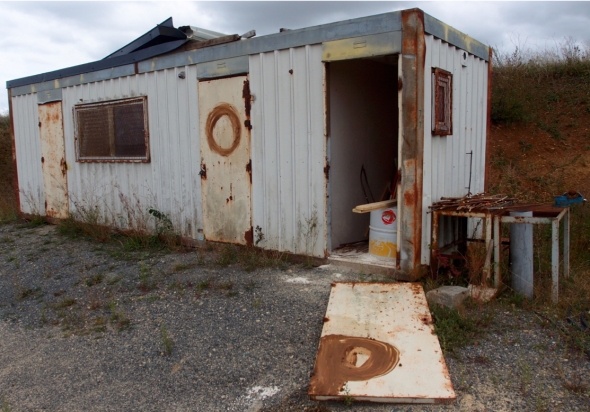 The experience of GNAP France has given me a fresh perspective on my own prejudices, reiterating the value of personal tactile experience and expression within an environment, offering the opportunity to celebrate and share aspects of nature that may often go unobserved on both a minute and architectural scale, as well as space to develop a deeper sense of oneself within Nature. It is all a learning process. The residency offered such a space to the artists with little pressure to produce but simply to participate – to make contacts, to observe and to share within an international setting: something many of us seldom have the chance to enjoy. In the words of Italian artist, Valeria Codara, “It is only when we open ourselves to others that new ideas can emerge” (one of the few political sentiments expressed towards any of the work during the residency). Whether the individual works had ‘value’ in a social or ecological sense beyond the artists’ experience is always debatable, but it cannot be denied that the creation and participation in the whole experience was a rich and deeply transformative process.

The group of artists came from quite different creative backgrounds, culturally and professionally. We were also at various stages in our careers, the GNAP France residency offering differing possibilities for each of us. International networking, including the chance to really meet people we were otherwise only aware of online, was a key element as well as an international flavour to add to our profiles. Work-wise, while many of us approached each site afresh, many brought signature themes and forms to their responses. French artist Pierre Guilloteau brought along his deconstructed ‘wooden ball’ to reconstruct at various sites to great affect as part of his ongoing Longitude 0° project. Others created simple animations or filmed and produced performance pieces – quite a feat in such short periods of time. Some work was monumental in scale some definitely quite ethereal. Some worked with others, some alone. Thankfully there was a fair share of humour too.

Despite a renewed appreciation of the craft, delicacy and aesthetic appeal of some of the more ethereal sculptural pieces my own work remained closely linked to a sense of our contemporary global situation. I certainly played within the aesthetics of unfamiliar materials but feel my stronger works expressed Nature not as a pristine, balanced, elemental world but as a turbulent shifting ecology within which humankind plays an often provocative and sometimes frivolous role (if we are willing to get the joke!?). During the week I began to recognize patterns emerging in my practice. Ways in which I become attuned to a landscape, such as gathering sticks or forming balls from soil, from which the work would develop. There was often a sense of ritual to my process, acknowledging elemental forces within each installation. There was a sense of passing to the final pieces, suggestions of something that had happened to which others were witness, often tinged with sadness and destitution, sometimes with joy. I started to understand the importance of narrative within my work (thank you Sally). 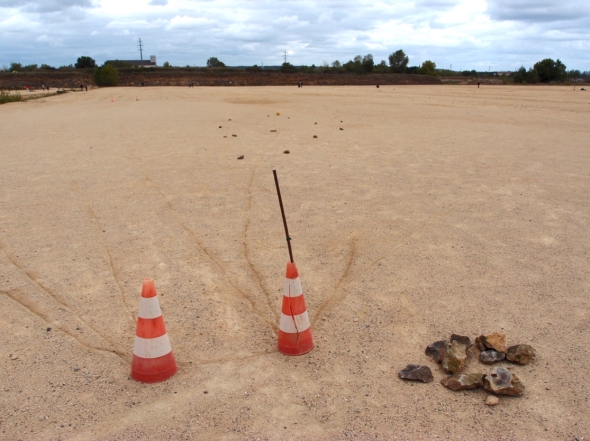 For my own final piece, en passant par (passing through), I secured a large cave between two quarries. I was personally drawn to the combination of contemporary objects, surfaces and detritus as well as an abundance of usable natural materials in the space. My intention was to create an immersive experience using pigments, objects, imagery and ideas I had gathered throughout the residency. As an artist working with natural materials and pigments I am often forced to question or recognize the connection between cave art and graffiti. The space and residency offered an excellent opportunity to explore this more fully. I hoped to create a sense of the ‘artist’ passing through, a ‘nomad’, using the cave as a temporary habitation and workspace. Also to highlight the imaginative possibilities of the shapes, textures and structures already evident in the space through a minimal intervention of mark-making and objects. For me it was the largest and most ambitious project I have attempted to date. Thankfully it was well received by fellow artists and the public. 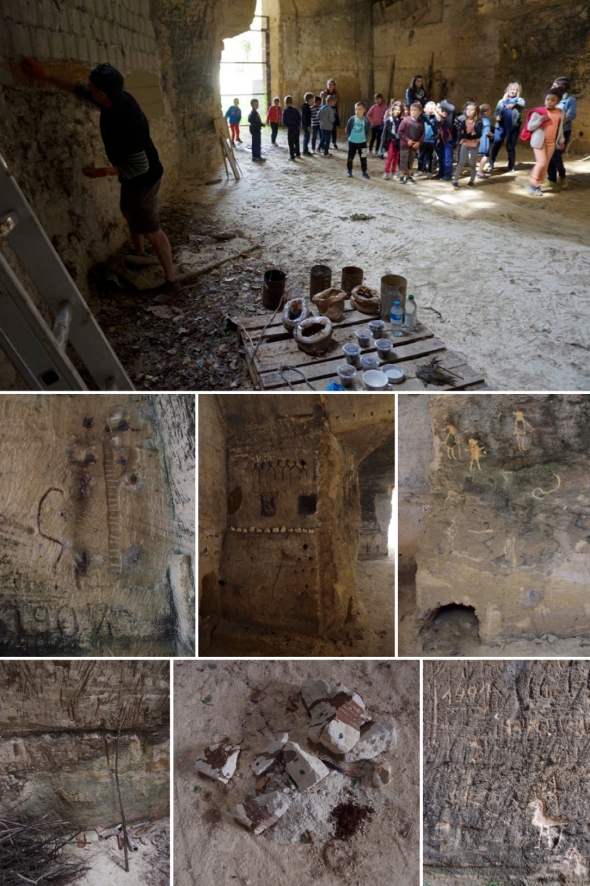 GNAP France is certainly an event I will never forget: as a time of learning, living and working on many new levels and having loads of fun with some beautiful new friends, rejuvenating my confidence, ambition and motivation as an artist. I can only thank all those involved – artists, organizers and sponsors – for their generosity in creating such an incredible encounter.

Thank you all for welcoming me so wholeheartedly to the GNAP family.

(Images are from my own collection or made available to me by request or through Yatoo Gnab Facebook pages. All images and works retain copyright to the artist and Yatoo GNAP. I hope I have mentioned everybody? Apologies for so many pictures of my work but hey!…:-))