As you may be aware, over the last 5 years I have been researching, almost exclusively, earth pigments in North Devon, (with minor dalliances to West Somerset, Dartmoor and Cornwall and anywhere else I have had the privilege to have walked for that matter). This aesthetically geologic journey began with an invitation by Appledore Arts Festival in 2008 based upon an application I proposed to paint with mud – a process I had first embarked upon while living in Co Clare, Ireland in 1992, as a means to express the resonance of Nature through my painting.

Initially, I gathered finely sorted soil from local molehills and then added manufactured colours and paints to introduce children to the Earth – something many from inner city locations had surprisingly and somewhat disturbingly never had the pleasure of experiencing. As I continued my hands-on research in North Devon I unveiled a range of vibrant and definitive earth colours at once universally familiar while also strikingly specific to the region. I began to question if such colours, wherever they may be sourced, may in some way define or influence the culture of that region – whether it be purely aesthetic (if there could ever be such a thing!?) or more industrial and agricultural through the minerals they may signify and provide, and hence the soils and habitats they promoted? For me the purpose of my art process has been to explore and share our relationships within the animate earth, and so my work with rocks and soil is a fitting vehicle for such an intention. Through greater awareness and development of this avenue of research I was more recently invited to work with CCANW and RANE to help develop SOIL CULTURE – a programme of events between 2013-16 to highlight and discuss the importance of soil through the arts. As part of this project my work is presently being exhibited at the Innovation Centre in Exeter University and will soon be taken to Bristol, along with an earth-painting workshop, for the Soil Association National Soil Symposium on 13-14th November[i]. My own interest in such projects, and indeed my own fascination with earth pigments and naturally sourced materials, is how engagement with such processes may entice us (the apparently civilized and privileged ones of the West) to ‘get our hands dirty’ and to hopefully begin to better  appreciate, understand and further enrich some of our roles, responsibilities and relationships within this world.

Most recently, on the advice of a fellow artist, my research took me to Lulworth Cove, Dorset, on the geologically celebrated Jurassic Coast, with the promise of a green clay – a colour, like blue, notoriously difficult to locate in the mineral world. My own experience of earth ‘greens’ so far has been of ferrous (iron III) oxides (created anaerobically in swamps millions of years ago) found in West Somerset and Heasley Mill, and of Copper Carbonate or Malachite at the old mines around Heasley Mill, North Molton, in North Devon. However both had proved somewhat difficult to process and maintain the greenness evident in the field, so the promise of a green ‘clay’ was most appealing. It was to be my first visit to Lulworth, renown for its striking coastal form and array of sedimentary folds, layers and faultlines, although I had been aware of the site since school days[ii]. So it was with great excitement, despite the best wind and rain Engalnd’s autumn could provide, that we set off, trowels and containers at the ready, in the search for another rainbow. While the promised green did not live up any better to expectations we were by no means disappointed… 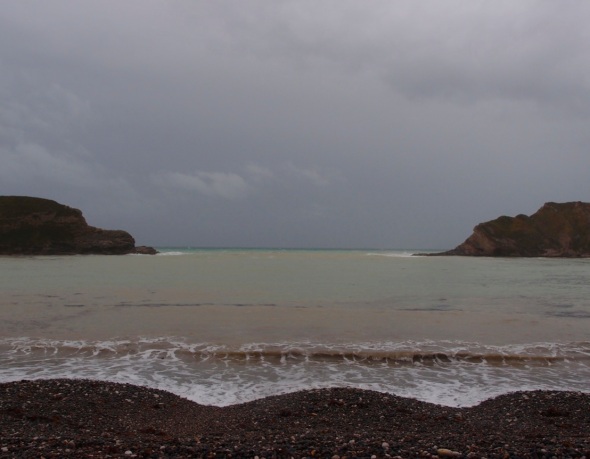 every singular place has a palette of sorts, conjoined

a rainbow of its own evolving experience

wherever we are, we may chose to reach out

to absorb and inhale this plethora of time

to exhale and physically express our own intimate response

in line, in hand, in respect of nature as itself and all within

[i] For more information and opportunities to get involved please visit http://www.ccanw.co.uk/